By Jeremy Rist of Urban Pitch

With a sound that harkens back to hip-hop’s golden era, Cousin Feo’s music is also notable for its witty references to the beautiful game. We get to know the Los Angeles-based rapper, discussing his roots, his love for soccer and hip-hop, and how he’s able to fuse the two effortlessly.

Besides his booming voice over gritty instrumentals, there’s one common theme prevalent throughout Cousin Feo’s catalogue — the beautiful game. Whether it’s his 2018 EP A Little Caviar or his ongoing Death at the Derby series alongside Toronto MC Lord Juco, Feo’s lyrics and track titles are rife with footy references both obvious and clandestine. 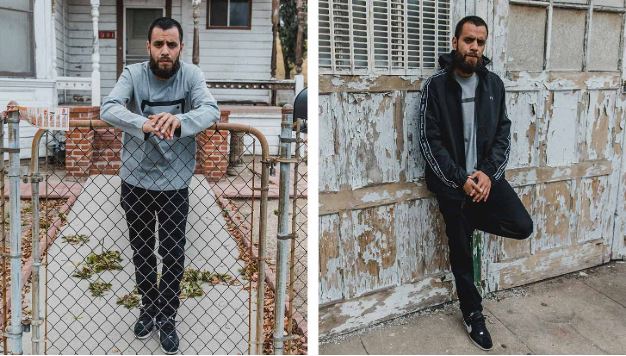 Born and raised in South Central Los Angeles, Feo grew up in a diverse household that featured Guatemalan, El Salvadorian, and black roots. His family had a huge influence in his infatuation with both hip-hop and soccer.

“Music has always been a part of my life,” Feo said. “My uncle was a DJ, so you know we had the turntables in my grandparents’ crib and they was always playing records. My younger uncle was the one that put the hip-hop on the table for me. He was the one who gave me my first Wu-Tang tape, Bone Thugs tape — everything that he was kind of over because he was on to the new wave. So I would just grab all that stuff and just be a sponge, be a student.”

It wasn’t just music that ran in the family tree either.

“I grew up playing soccer too,” he continues. “One of my older uncles played professional in Guatemala, and his son played in college and was successful at every level. Family-wise it’s in the blood. I grew up playing and I’m still in love with the sport. Obviously, I think the music is a reflection of that.”

Feo has landed at the intersection of hip-hop and the beautiful game after a long journey that includes dropping out of college, working in warehouses, and doing anything he can to make ends meet, but he always remained true to himself and his passions. His persistence has led him full circle to today, where he’s able to combine the sport and music in a unique and creative way.

His latest track, “Favela Favorites,” is part of his Death at the Derby series, in which he and Lord Juco highlight some of the world’s most intense football rivalries. Inspired by the Flamengo-Fluminense derby, the the track is a current take on a golden era sound that transports us to the streets of Brazil, where football is the primary language.

The football-rap crossover is something Feo does effortlessly, something he attributes to hip-hop’s malleable nature.

“Hip-hop is the only genre that allows you to fuse these two different things together,” Feo said. “Wu-Tang introduced that whole martial arts aesthetic, and even other people are picking up on it. Same with this new wave of cats coming out known as Griselda Records, they got the whole wrestling aesthetic. I look at those things and I see people bridging hip-hop with these other cultures, with these other interests that people have, and making them one.

“It wouldn’t sound dope if it was country music, it wouldn’t be dope if it was rock. It wouldn’t work. The elements of hip-hop allow these songs to come to life and sound like something you would want to listen to. Music and sports-wise that where it all comes from.” 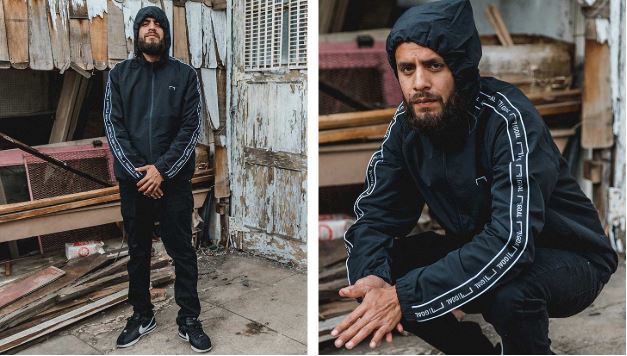 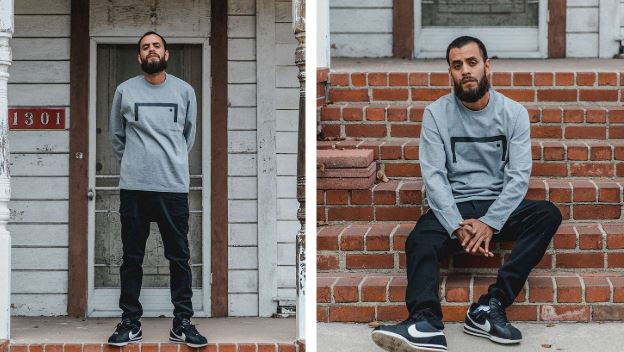 Cousin Feo isn’t the new kid on the block, but he’s not the old head either. His life experience provides necessary vision and direction to his projects, and he’s also able to link up with younger artists that have the motivation and hunger to push things forward.

We have a mutual friend in Zoomo, a talented producer out of North Carolina that had Lord Juco on the “GetDown” track off his album Dawn. Feo was quick to point out how Zoomo’s youth and hunger contribute not only to his talent, but also how it gives Feo himself inspiration and motivation.

“Zoomo’s an amazing talent, man,” Feo said. “And he’s only going to get better. He’s young and he’s already making moves. That’s what I think about when I’m around younger cats. Because Juco is 26, he’s younger than I am, so when I see them and I see the ambition they have at the ages they have it, it just makes me mad at myself — imagine what you could be if you would’ve been as hungry as these cats are at the ages that they are? They inspire me. They’re amazing at what they do so it makes me step it up. So it’s cool to be around people like that.”

Feo and Juco originally linked up via social media after Juco came across Feo’s A Little Caviar project with producer Keor Meteor. The EP was inspired by French football, with tracks titled “Cantona,” “Thierry Henry,” “Zidane,” and “Platini,” amongst others. Feo could tell that the support and interest was genuine and real and so they started bouncing some ideas back and forth.

“I came across A Little Caviar on Loretta Records’ page and seen ‘Zidane,’ and I was like, ‘This guy is special,'” Lord Juco said. “I grew up playing soccer so I just thought someone rapping about it was super refreshing. Since then we’ve just clicked, and the rest is history.”

After finding out they supported rivaling teams in Liverpool and Manchester United, Juco naturally suggested they did a track about the North West Derby, the seed that would eventually blossom into Death at the Derby.

“After I reached out we started talking football and quickly realized were born rivals,” Juco said. “He’s a bloody United fan and I’ve been a Scouser before I even knew it. So it was only right to start with the North West Derby to kick things off. We put together the first track without really realizing what we’ve just sparked.”

After “North West Derby,” the duo expanded the collaboration to the monthly series that it is today. They reached out to producers they knew to get the ball rolling, the first one being UK-based Hobgoblin. A former semi-pro goalkeeper and Arsenal fan, Hobgoblin took to the idea instantly and came up with the beat for “Turkish Empires,” an absolutely filthy track with Middle Eastern vibes. Even amongst intense competition, a Man U fan, Liverpool fan, and Arsenal fan can come together and still make music that slaps.

What they’ve sparked is a project that fits perfectly into a niche community of hip-hop heads that also love the beautiful game, but the interest is not limited to that small circle. The music is definitively underground but it’s also pumping out vibes that are drawing in the casual observer.

“As fans of the game, we want to add an element to how people view it and show why we enjoy it, and why everything is like a religion when it comes to it,” Feo said. “There’s people around that listen to the songs that don’t even watch the sport but the music is getting them into it. So we’re educating people who may not have known or been into the sport, or even people who aren’t familiar with the players we’re referencing.”

“The footy fans that are still hip-hop heads and were waiting for this is who we’re doing it for,” Juco added. “Every and any bit of love toward it, even just a mention, is enough because we’re both having fun with it. This is everyday for us, but being able to talk about footy is a bonus.” 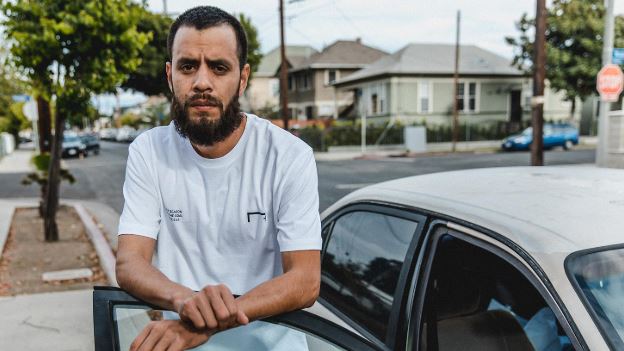 The music has a rough aesthetic to it but it’s still professionally polished. You can hear the Wu-Tang inspiration and a lot of other underground sources in the beats, rhymes, and scratches. This project belongs in the branch of hip-hop with artists whose music isn’t shy about their street roots. This isn’t music that glorifies the violence and craziness of the rivalries they’re celebrating, but it’s also not trying to hide the sometimes brutal realities of these games.

“You go outside of the United States, man, and it’s life or death,” says Feo. “Thats why it’s called Death at the Derby, because people have died over this. That intensity — it’s the beautiful game but it can get dark when it’s taken too far. It’s a crazy part of the sport that people don’t want to acknowledge and talk about all the time, but I think we’re doing it in a way that’s not celebrating it but bringing it to your face because it’s a fact.”

Juco and Feo plan on releasing one track every month for the next year and the different derbies they’re highlighting have already been selected along with producers for each, with Hobgoblin on four of them.

“When you’re in Europe you have access to all different kinds of records,” Feo said. “Hobgoblin’s ability to tap into all these things and flip it, add that hip-hop element, it’s dope. It makes you feel like a scene out of 300. Like I came in on elephants with big swords or something. When we heard [the “Turkish Empires”] beat we knew we had to start with that. That energy was what we needed.”

Producers for the project are a big part of what make it so special. With some hailing from New York, United Kingdom, Australia, France, and Italy, it truly is an international experience and there’s a lot of exciting names that haven’t been introduced yet but we will see as the project moves on.

In the meantime, we can enjoy the releases as they come and know that there’s plenty more in store. To all the hip-hop heads that get up early on the weekends or cut out work to catch a match, this is for us and by us. This is ours.

As Feo said, “I’m definitely that guy that’s up on stage rocking a jersey. It’s life. You breathe it. It’s a part of your day, every day. I’m just looking forward to where we’re going to be at the end of the year after releasing all of the derby joints.”

You can stream Cousin Feo’s music on Apple Music, Spotify, and SoundCloud, and be sure to check out the entire Death at the Derby series on Bandcamp.

Wardrobe by GOAL™
For more stories on the intersection of football and street culture, visit Urban Pitch.