Since 1966, every World Cup has introduced respective mascots created by governing bodies from the each tournament's then host nation. Qatar is due to unveil its mascot by 2020 and could perhaps take advice from previous World Cup models. After all, there has been a bevy of unique World Cup mascots.

England 1966 began the tournament's trend of mascots with a lion named World Cup Willie. A lion was chosen to honor the English national football team, nicknamed the "Three Lions." Willie's attire resonated with English fans and proud Brits alike with his football kit that consisted of a Union Jack shirt and socks. However, Willie's cute appearance and 1960s Beatle-like mop-top made him a favorite with everybody who knew him. You would find something to like about Willie the more you knew him. 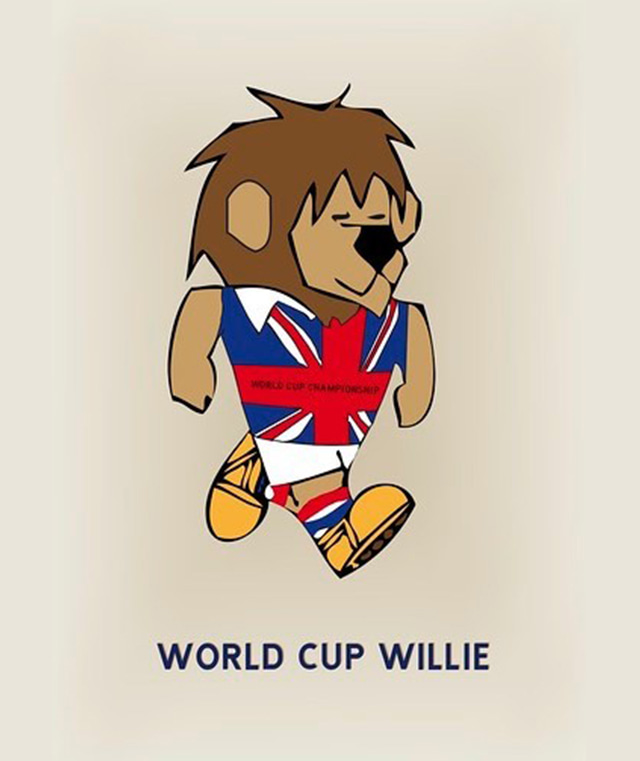 But the 1970s proved to be all about child mascots in football kits. The recognizable differences solely lied in the exterior. Juanito of Mexico 1970 sported the sombrero, a commonly worn hat in the region. The 1974 World Cup mascots were two contrasting boys for the price of one, Tip and Tap. Argentina 1978 mascot Gauchito's hat, bandanna, and whip are utilities for gauchos, cow-boys highly respected in the country. 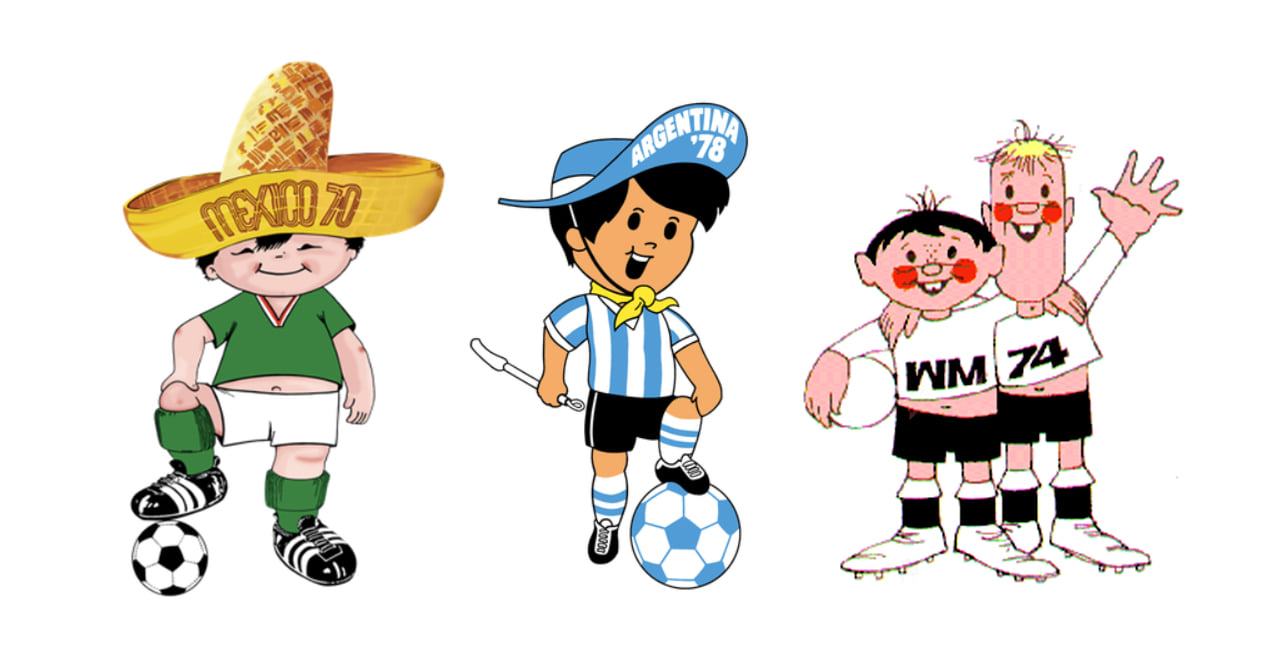 The Spanish 1980s mascots looked to commemorate commodities. Oranges were a naturally grown fruit in Spain and so for 1982, the country used “little orange” Naranjito as their World Cup mascot. Peppers had always been an identifiably defining component of Mexican cuisine. Like Juanito did in 1970, 1986 mascot “Pique” wore a Mexican sombrero to identify with his country’s heritage. The difference between the two was that Pique was old. His long mustache was a characteristic of several Mexican males and his farmer’s build was demonstrative of the country’s hard-working mid-to-lower classes. 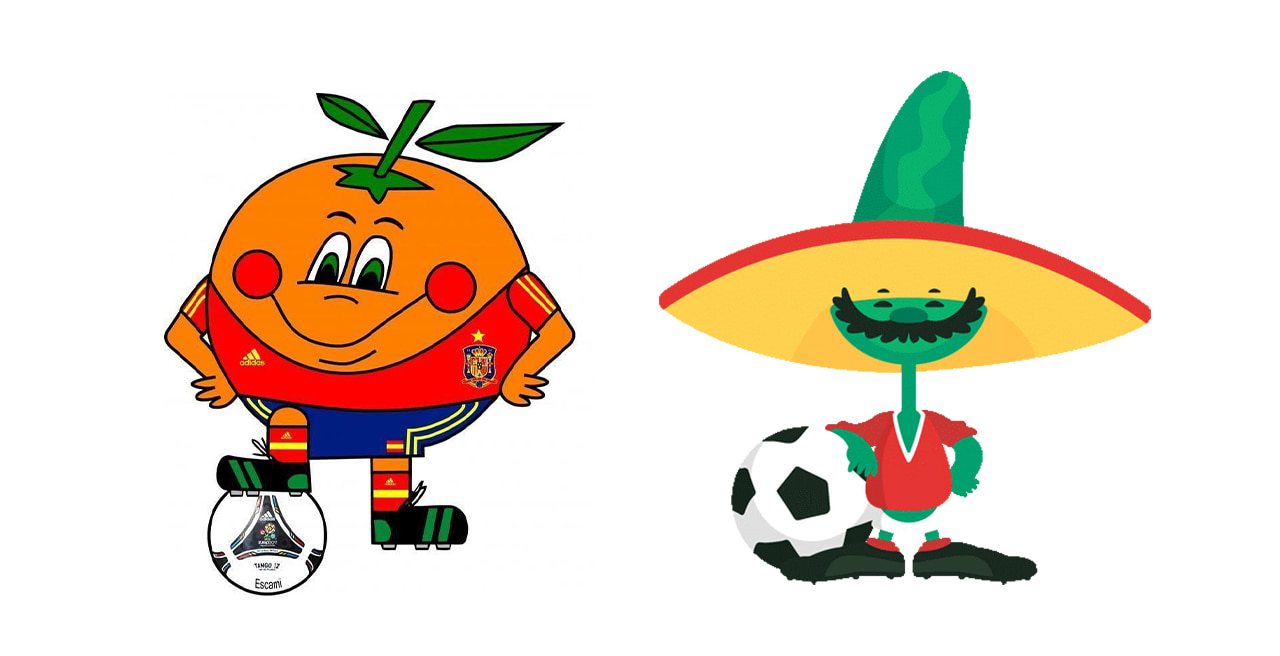 Italians got sick and tired of generic humans and animal mascots, so they decided to promote something unordinary for Italia 90 — a stick figure named Ciao, which is a casual Italian greet-ing. However, Ciao’s creation is more convoluted than it looks. Ciao’s limbs were made by separating letters from the word “Italia” and lining them up to form a figure. The sole missing component was the head and so instead of the football being something to hold, Ciao became the first World Cup mascot to have a football be part of him. To sum it up, Ciao was the first World Cup mascot that resembled an abstract piece of art. 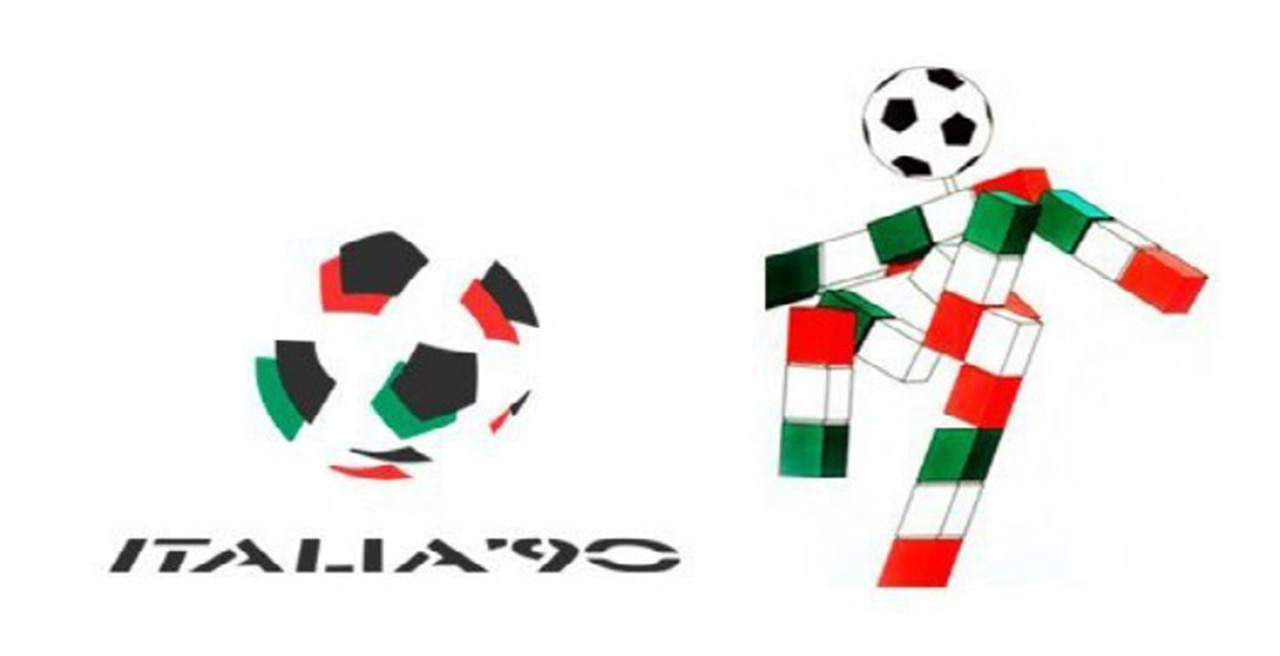 The rest of the 1990s was red, white, and blue. The United States selected the catchy sounding “World Cup pup Striker” as their World Cup mascot for 1994. The “Striker” promotes excitement for football fans considering it is the position who scores the most goals, which make the games more entertaining. America’s selection of the dog comes from the fact that it is the nation’s most adored pet. The usage of a cartoon dog serves two-fold, as it commemorates a TV genre popular in the decade and offers a cutely digitized dog friendly to viewers. 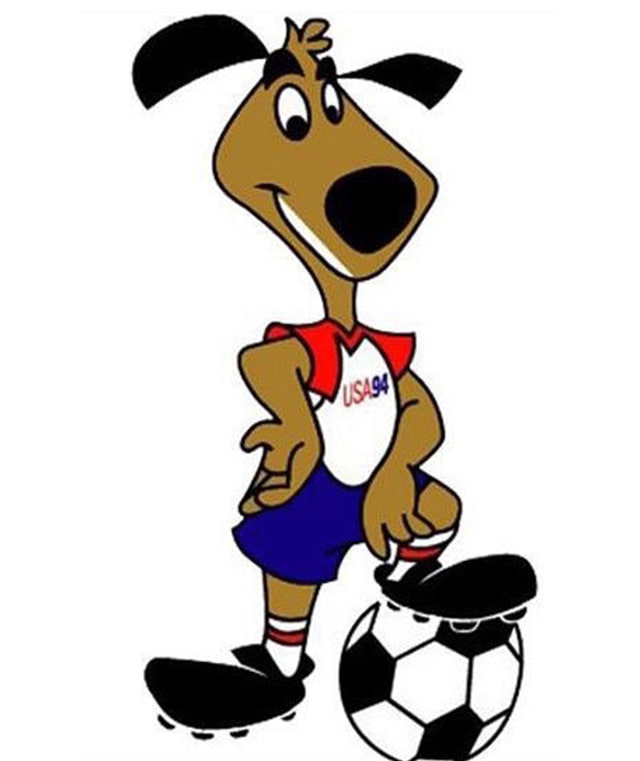 France ’98 promoted an unofficial national symbol as their mascot — a Gallic rooster. The cock-erel was named Footix, a portmanteau of “football” and a common French suffix “-ix”. Unlike Striker before him, Footix is drawn with hints of accuracy. The red comb and yellow beak are meant to serve as realistic components in comparison to his nicely covered blue skin. The fact that he points up towards the air with a smile in his face kindly suggests to the viewer that they should go do something football related. 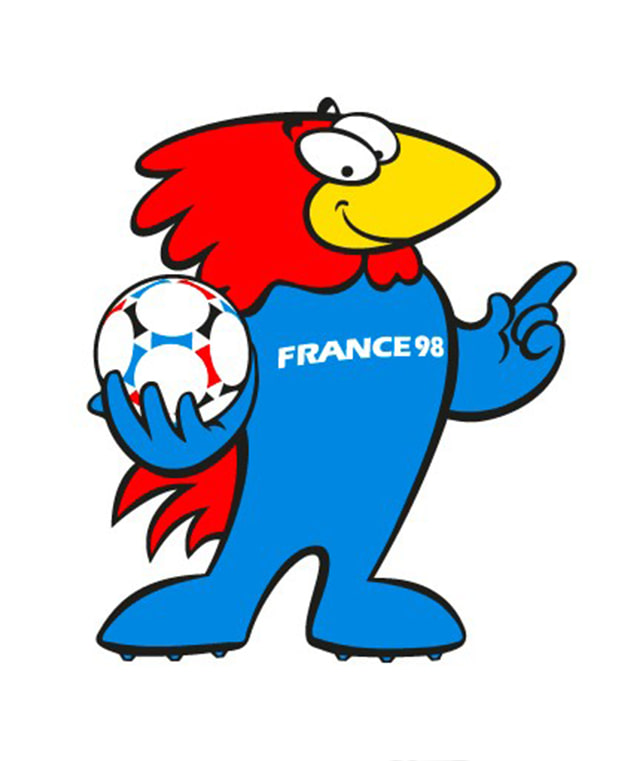 The 21st century initiated a change in style towards the way of the future. As South Korea and Japan both hosted the 2002 World Cup, they opted for detente — no hostility, no favoritism. They put their cultures to the wayside to instead promote a futuristic computer-generated cartoon group named the Spheriks — Ato (yellow), Kaz (purple), and Nik (blue). Both sides thought of children as their most important audience members, and decided on aliens reminiscent of Pokemon — a popular franchise in East Asia. Their efforts would pave way in Germany 2006. A rekindling of the 1974 Tip and Tap tandem matched with a futuristic vibe sparked Goleo the goal lion and Pille the anthropomorphic football. 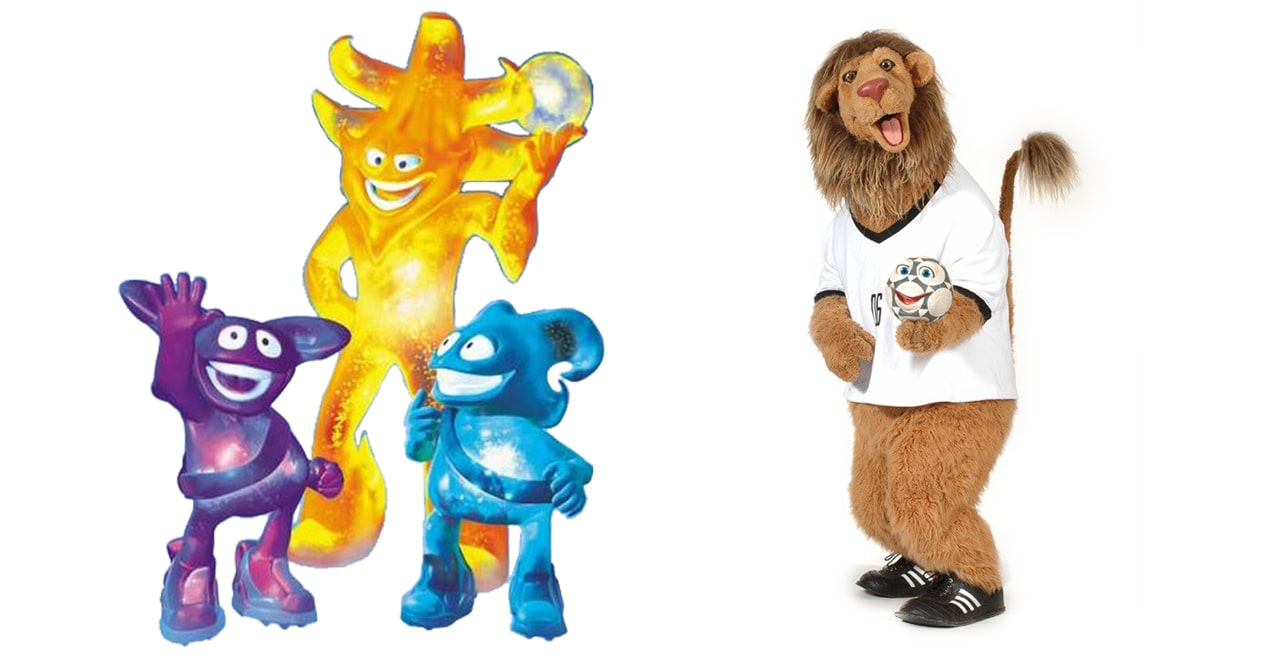 The prototypes of the 2010s have merged previous cartoon animal mascots and recent futuristic ones to create anthropomorphic animals. The first was Zakumi, a South African leopard whose name derives the country code “ZA” and number 10 “kumi” of several African dialects used to promote the year 2010. Leopards are a frequent presence in South Africa and yellow is an accurate portrayal of their skin color. However, Zakumi’s yellow skin matched with his hints of green is meant to commemorate the South African national football team and their color scheme. 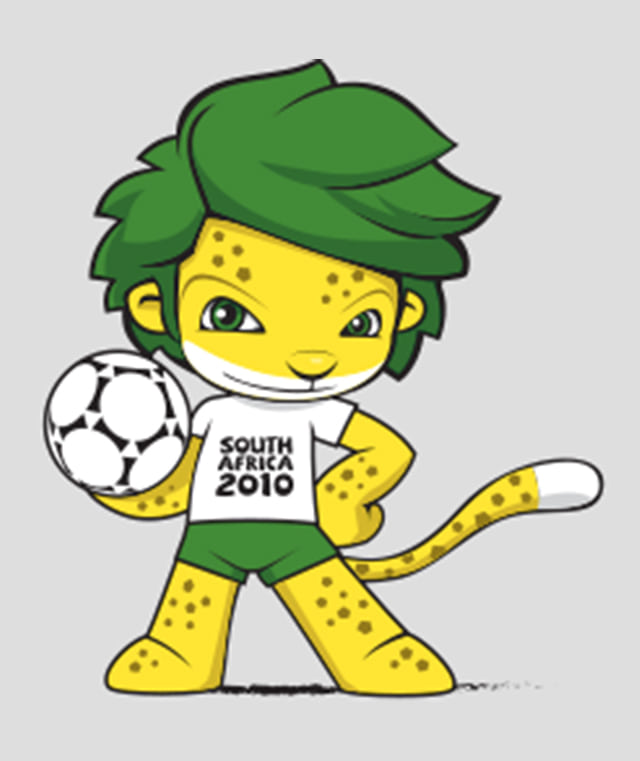 Brazil 2014 promoted a three-branded armadillo named Fuleco, a portmanteau of football and ecology. Brazilians have stressed environmental conservation, and the three-branded armadillo serves as a vulnerable species who could be better preserved. Fuleco serves as an anthropomorphic model though, and so there are several adjustments made to appeal to human emotion. Fuleco features an attractive hybrid of blue, green, and yellow that makes him more cool. Armadillos are shy, yet Fuleco stands tall happily presenting a ball. Three-branded armadillos’ eyes are closer to their forehead, but Fuleco’s eyes are closer to his nose like a human. 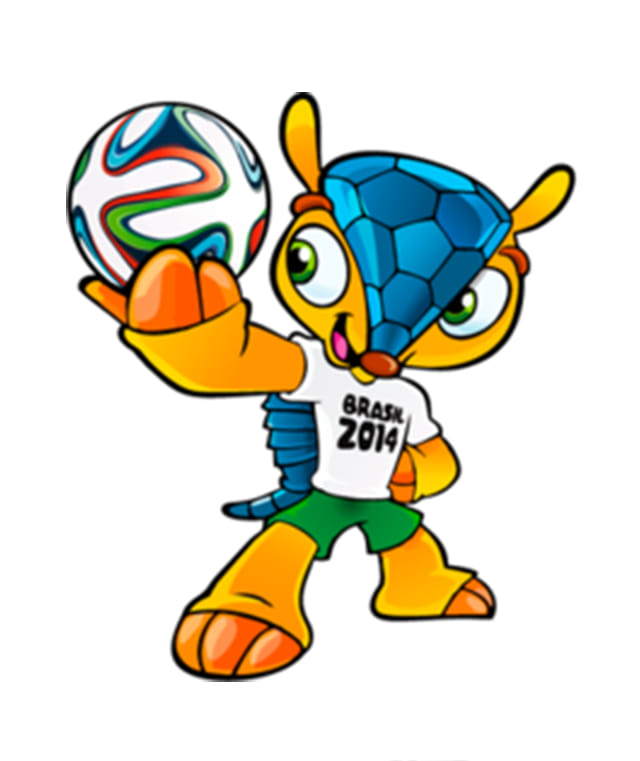 Finally, the 2018 World Cup promoted Zabivaka the Middle Russian forest wolf. Zabivaka is a somewhat tough, but accurate description of Russians in general. The blended words in English mean “hothead to score”. The unique point is the goggles, something that is reminiscent of what someone wears when they ski. But he is given goggles to make him look sporty, as they are sports goggles intended to protect the eyes — like in handball. Like the real-life Eurasian wolf, Zabivaka is fast and those goggles are a safety precaution to preserve them from the defects of his blazing speed. 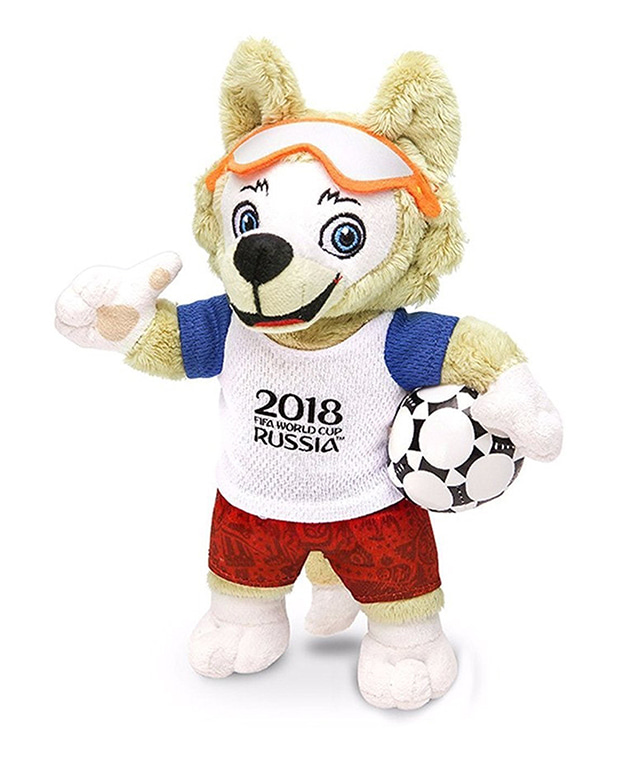 By Seho Park of GOAL STUDIO