When we arrived at the Top Hotel Prague after shooting 19 F/W film, Super Ball was already on fire. Our ambassador Luca had already been announced as a champion just two battles into the tournament. Luca won the Sick Three competition, in which participants present the best combination of skills using a triad of different tricks. Luca also won the Challenge Battle, where participants are required to clear multiple skill rounds in which each round gets increasingly more difficult. We were also able to meet another fellow GOAL STUDIO ambassador in Conor Reynolds, who was a judge in both the Sick Three and Challenge Battle competitions.

Since we did not have enough time to catch up, we decided to move on with other ambassadors who did not have conflicting schedules that day. We went out to the city center of Prague with the remainder of our ambassadors: Yoanna, Ricardinho, and Kazane. GOAL STUDIO ambassadors moved from the Lennon Wall to Charles Bridge and Prague’s Old Town Square. 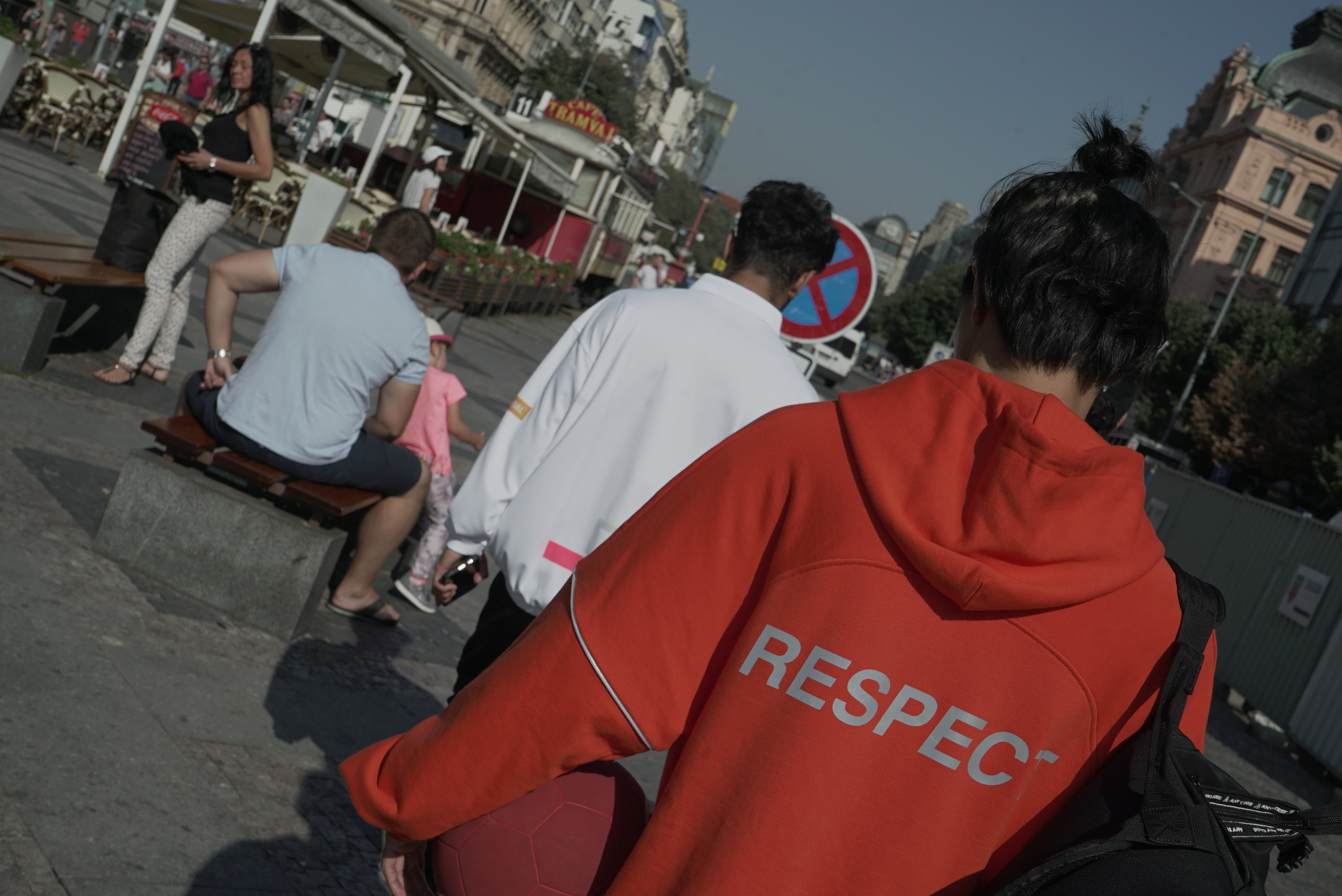 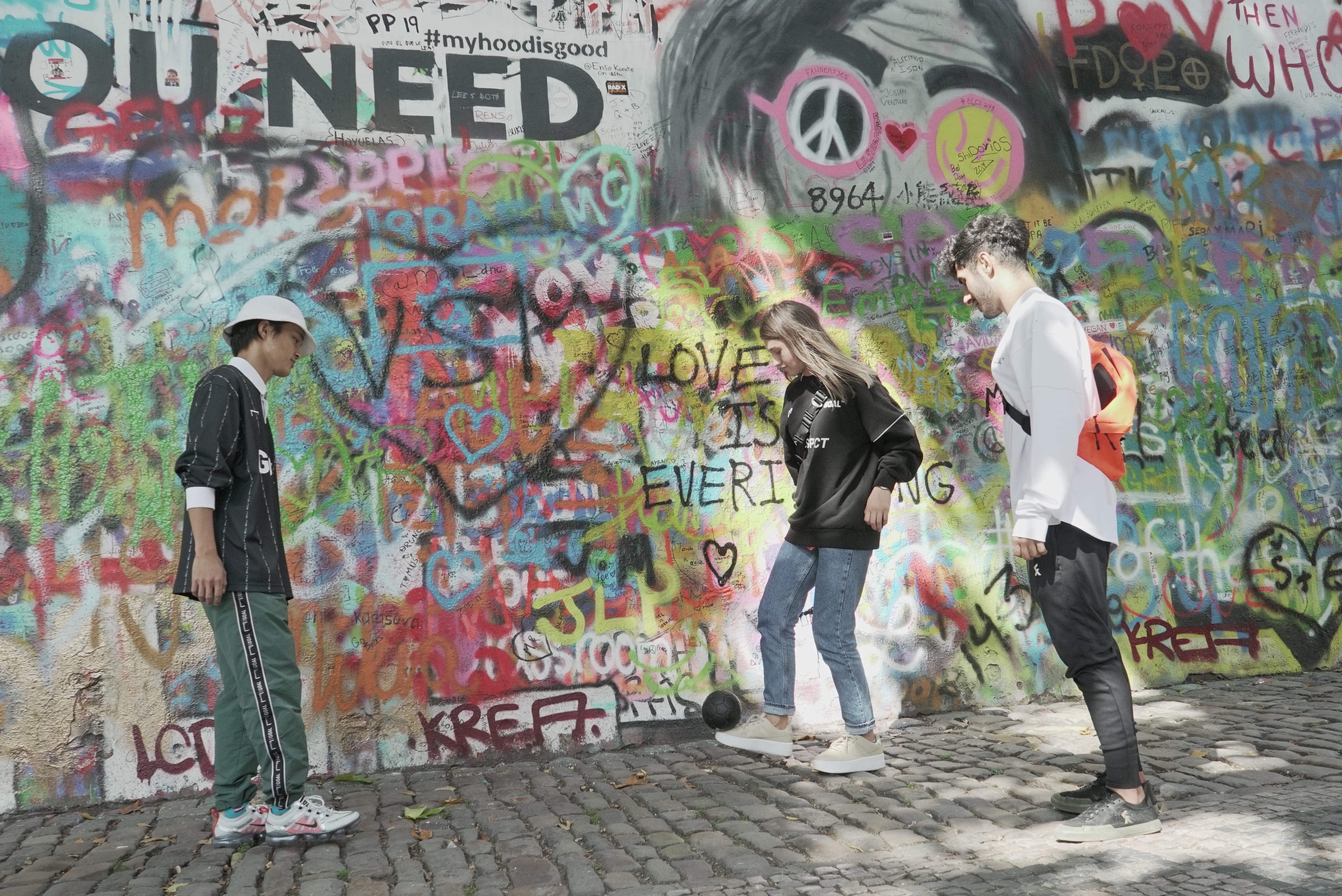 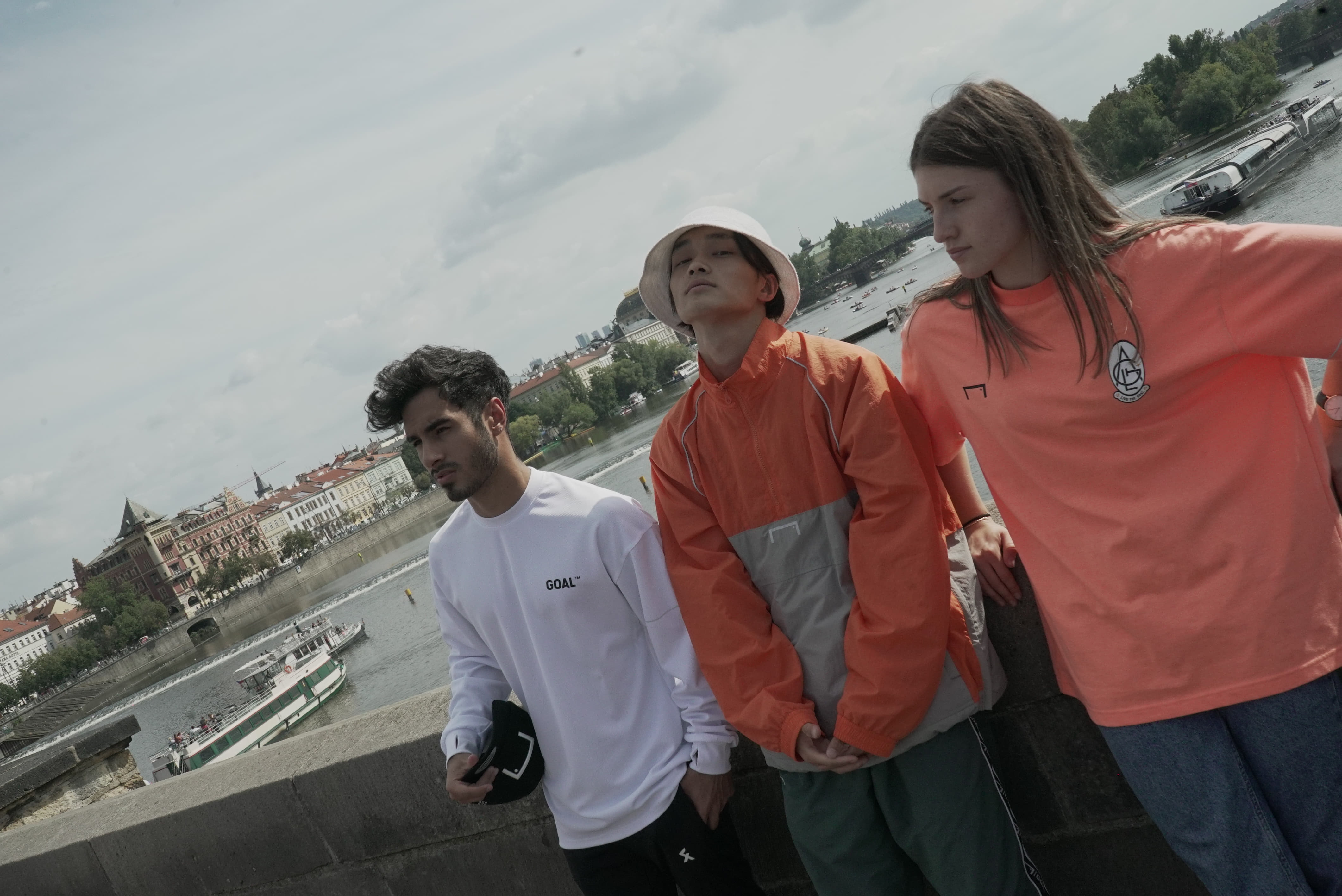 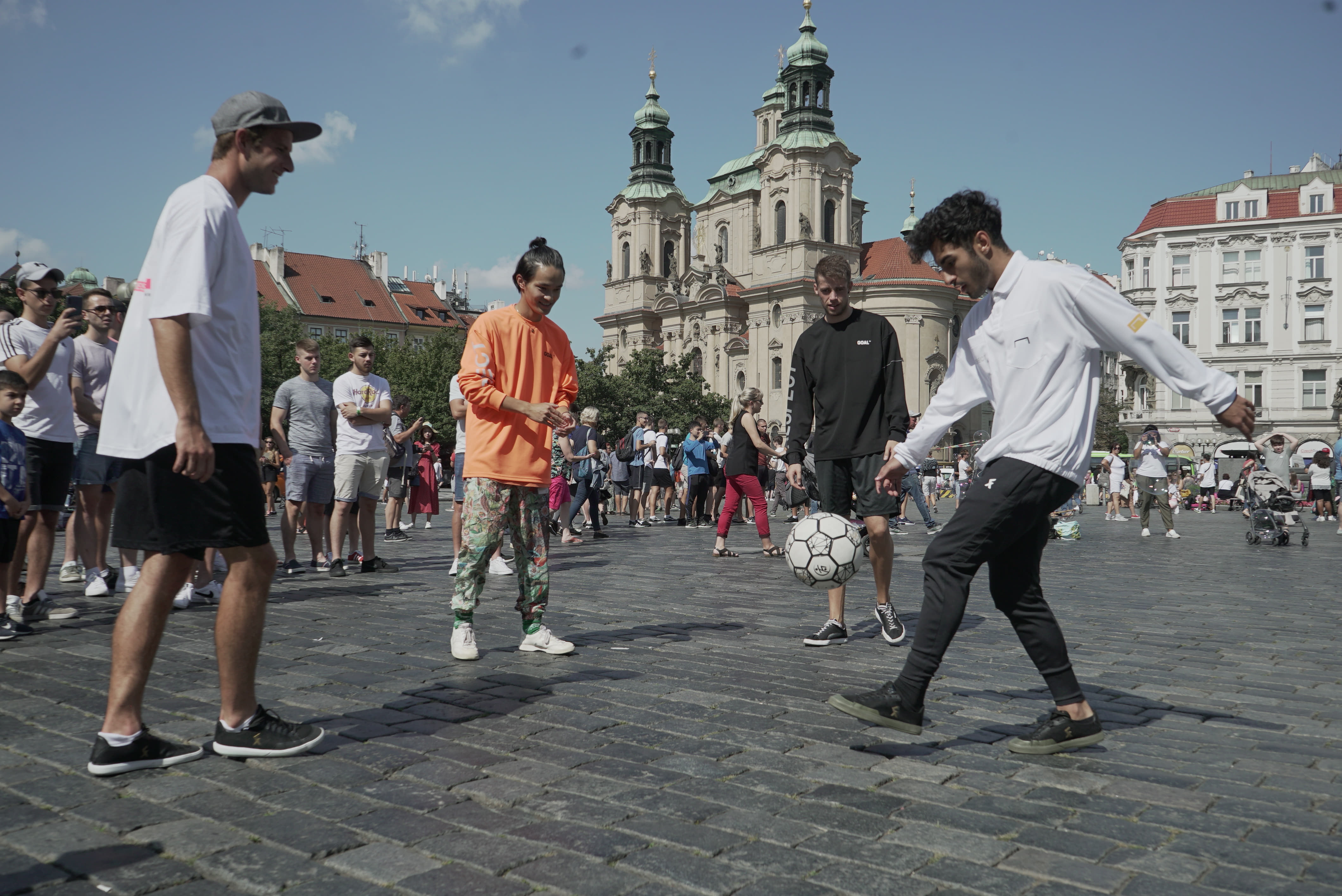 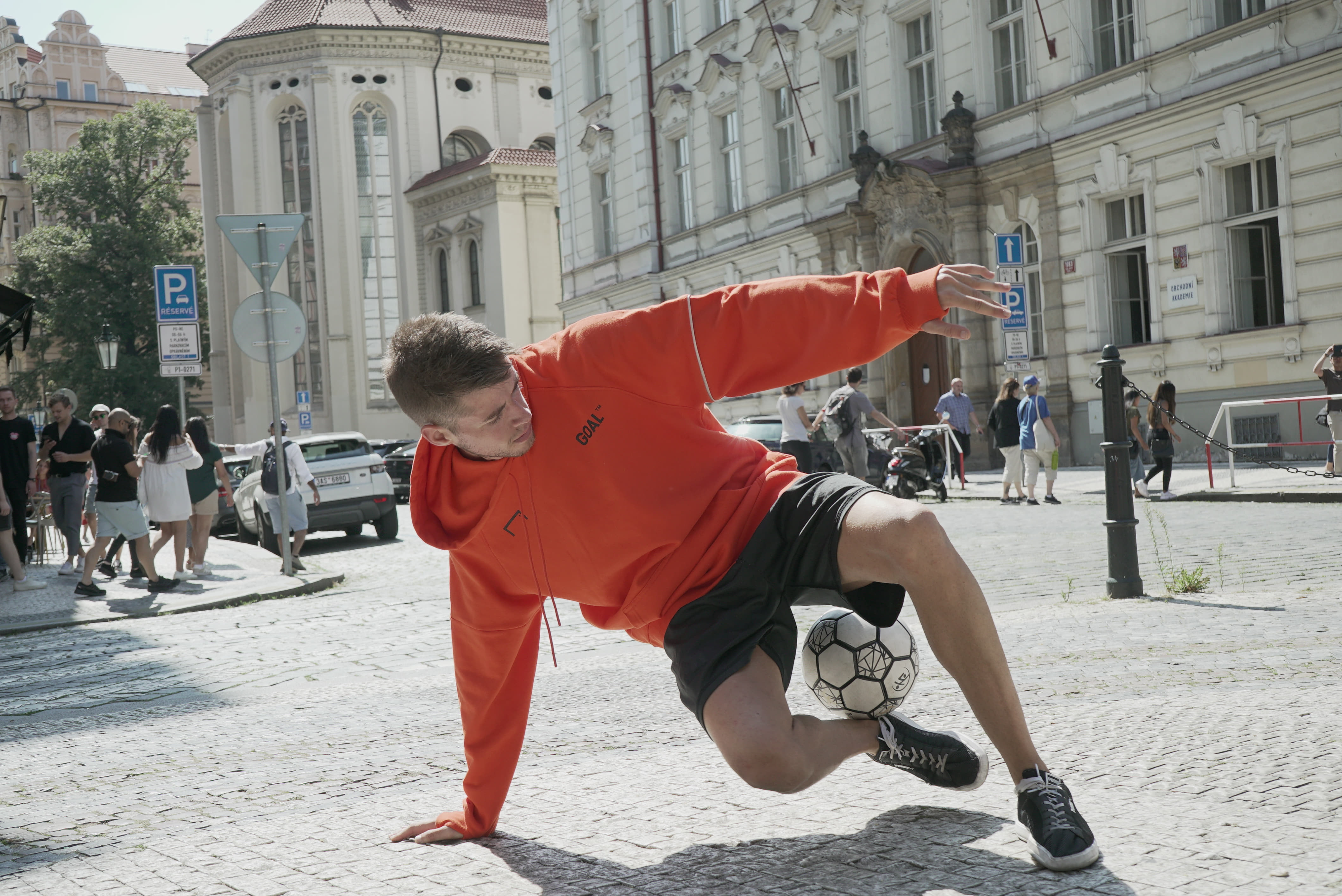 
Conor and Luca were eventually able to join us when we arrived at Old Town Square. Their arrival helped spark a crowd frenzy featuring multiple groups of tourists. Our ambassadors started to present their tricks in front of tourists in the town square, and people started to gather around them to enjoy the performance. They needed to sustain peak performance at the tournament, yet our GOAL STUDIO ambassadors were of great help even with their tight schedules.

Yoanna is one of the most popular individuals in the freestyle footballing scene. She was unfortunately unable to make a bigger step in this particular competition, thanks to a loss to this year’s champion Aguska in the Top 8. She still had one of the biggest applauses from the audience though, demonstrating her status in the scene. It isn’t foolish to say she is the Kylian Mbappe of women’s freestyle football. It is inevitable that we will see Yoanna become an eventual champion under GOAL STUDIO. 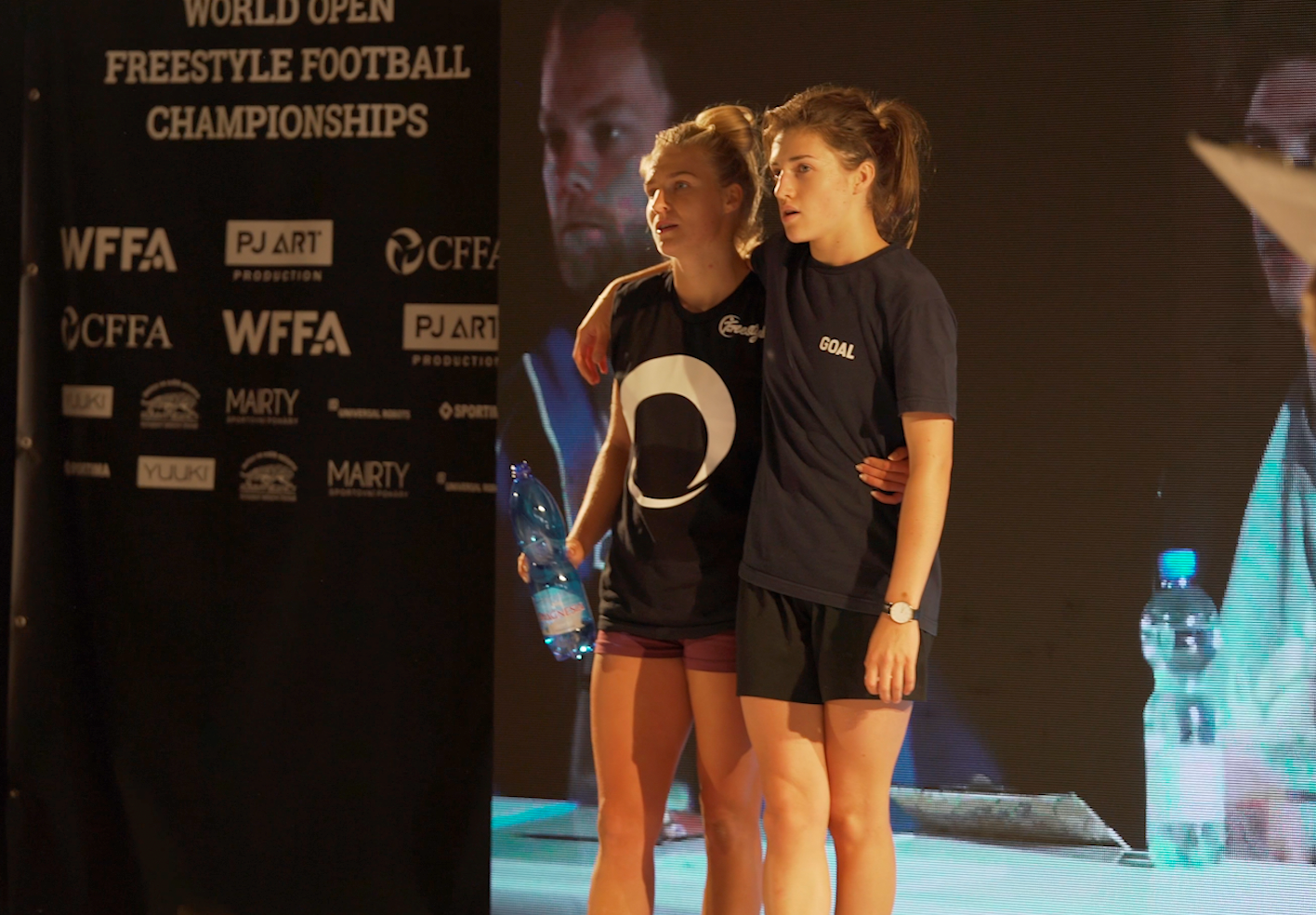 Agusak & Yoanna waiting for the result

After the Women Freestyle Football Top 8 battle, the women’s Top 4 battle and men’s Top 16 battles took place in larger arenas. Yoanna had to watch the battle with the crowd due to some bad luck in the draw. However, Kazane and Ricardinho were able to participate in this battle and demonstrate their capabilities. Kazane’s performance was an unfamiliar yet unique blend of football and freestyle dancing. His fresh freestyle tricks were relatively different, making him a recognizable fan favorite. On the other hand, Ricardinho is more of a traditional freestyle footballer and used classic Brazilian rhythm to incorporate his familiar yet attractive freestyle skills to the audience. That’s not to say it wasn’t a bad idea either, considering he was the champion of Super Ball 2017. If you enjoy taking photographs and have a chance to meet Ricardinho, I recommend you take a walk with him and see just how famous he is when people ask you to take pictures of them with him.

I would like to give a round of applause to the GOAL ambassadors who all demonstrated their utmost top-notch performances. Though the results were not what we expected, they were able to replicate impressive performances we knew they were capable of doing. Kazane even got the biggest applause from the audience for his unconventional performance. It was just unfortunate for GOAL STUDIO ambassadors that they beaten by raw, but hardworking underdogs. Our GOAL STUDIO ambassadors were never disappointed. They humbly accepted the result, and they turned around this sad moment as motivation for the future. With this humble attitude in them, you may expect them to hit their strides in the future. 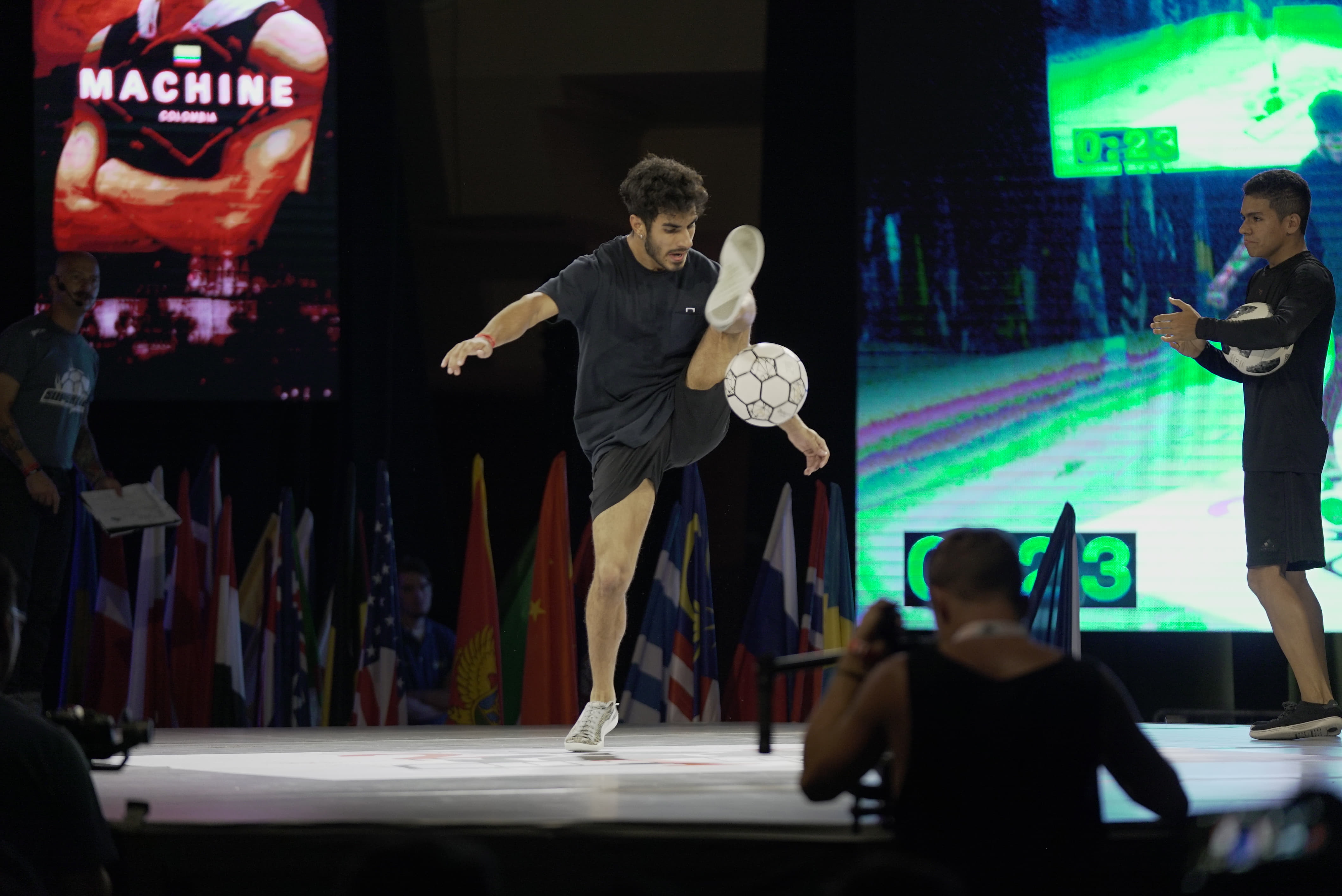 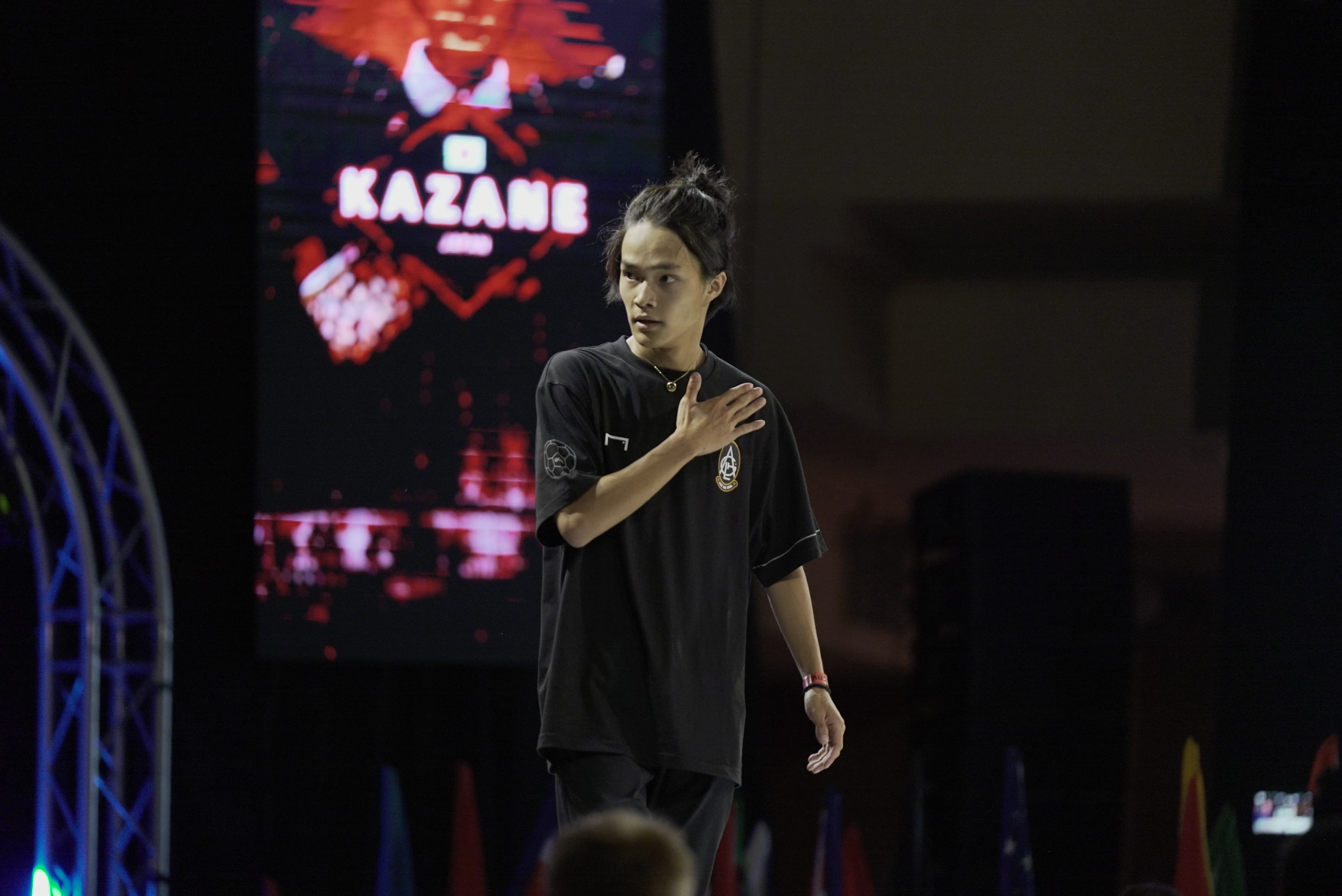 
Super Ball 2019 has reached its end. Norwegian giant Erland Fagerli became a back-to-back World champion. Fagerli won the Show Flow, Double Routines, and the Duo Battle — making him a Super Ball treble winner. It was especially during the double routines where he showed unrealistic and creative tricks with his own brother, Brynjar. I would also like to give a shoutout to one Japanese freestyle footballer by the name of Yo. A friend of our ambassador Kazane, Yo delivered a great performance against the defending champion Fagerli in the Super Ball final. Although Yo did not win the championship, he showed that he’s more than capable of doing so in the near future. 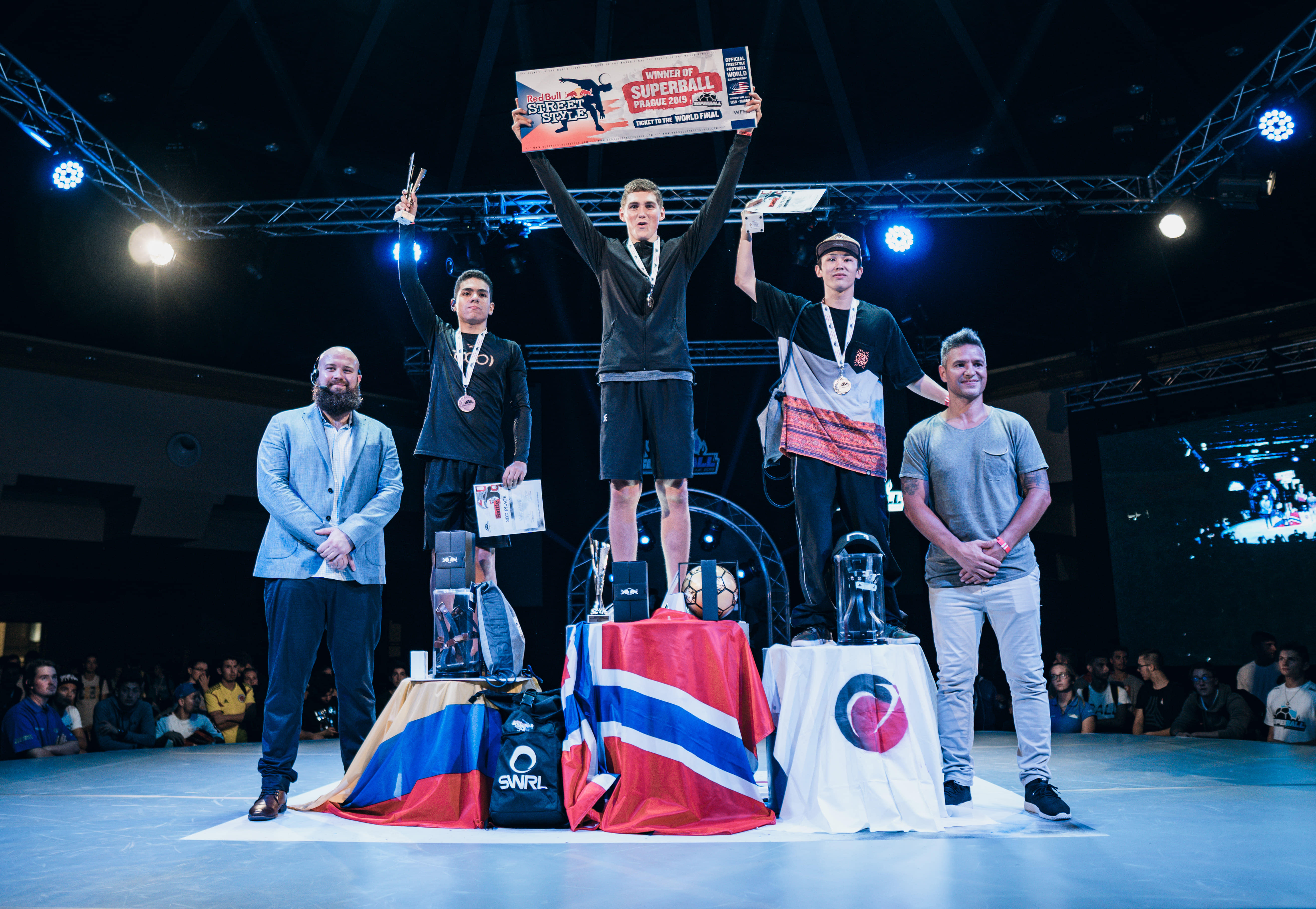 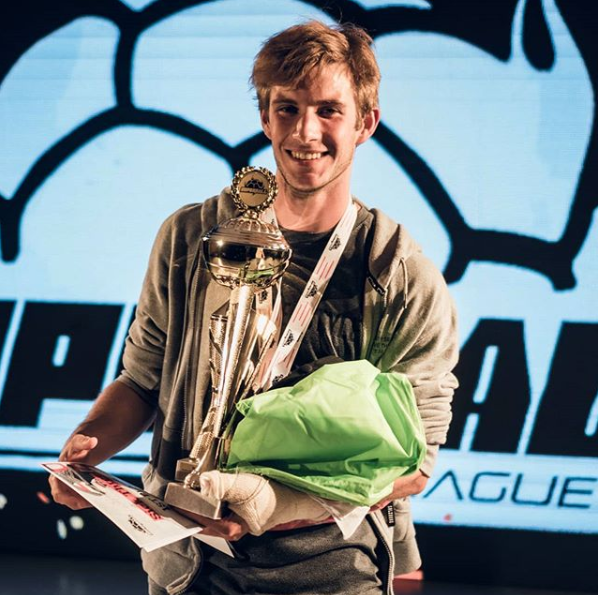 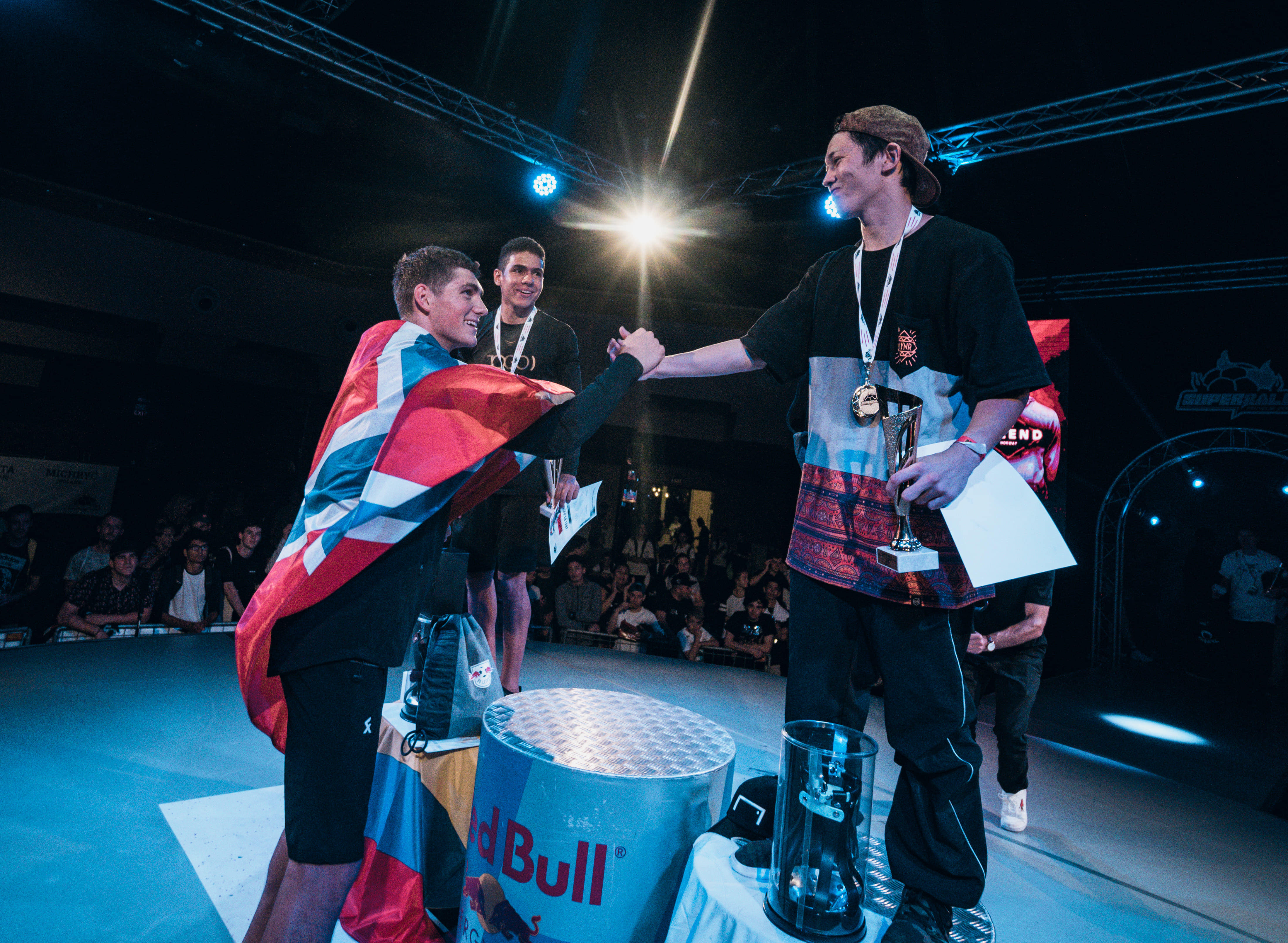 Erland & Yo on podium

In the female equivalent, it was Aguska who snatched the women’s championship. Laura Dekker also performed well, but was unable to stop the rising fire that was Aguska. The absence of a favored superstar meant that the Individual Routine portion of the competition seemed to be wide open for every challenger. In the end, the winner would be another Japanese freestyle footballer by the name of Yosshi. At least our Italian Beast and GOAL STUDIO ambassador Luca won a double with victories in the Sick Three and Challenge Battle.

It is imperative to note that Super Ball is an annual competition in Prague, Czech Republic. This competition blends very well with Prague as a tourist attraction. We were able to notice the big potential of freestyle football into becoming a major sport. There is no exit when you fall in love with freestyle football. Even we didn’t know the potential and attractiveness until we physically visited this tournament. Fast tempo, exploding power, and unrelenting tension delivers an unmovable attraction towards local audiences. If you have an opportunity, visit Prague for Super Ball. Make time to see greatness.